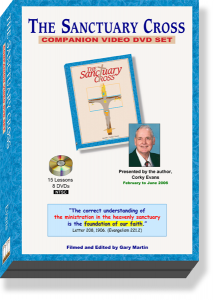 Now available! A complete video DVD recording of Corky Evans’ sanctuary class based on his book, The Sanctuary Cross.

In 2002 we published Corky’s teaching notes and sketches along with a few brief comments in a professionally typeset book called The Sanctuary Cross. This DVD set based on the book captures Corky’s extensive commentary, explanations and enthusiasm for the sanctuary message and brings his book to life.

In 2006 Gary Martin, one of the students in Corky’s sanctuary class, took his video camera to each meeting and recorded the entire series. He initially made the recordings for his own use, but then found that many of his friends and family members were interested in having copies, so he took the time to edit the videos and add on-screen helps. Foundation of Our Faith has partnered with Gary to produce and distribute his set of DVDs. Although the recordings are made with amateur video equipment, the quality of the video and audio are quite acceptable, and the message they contain is clear.

During the editing process, Gary added several features to the recordings as illustrated below:

The DVD set contains 15 lessons on 8 DVDs for a total of more than 28 hours of Bible study. The suggested retail price for the set is $39.95. It may be purchased from one of our resellers.

© Copyright by Foundation of Our Faith, Inc.